A Real Developer is a side-project I built over the weekend poking around with WebMatrix. 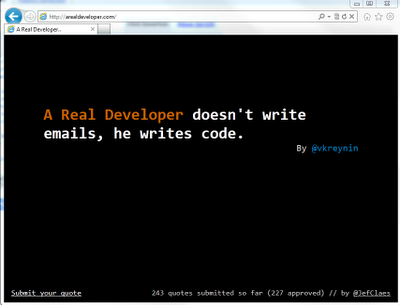 It got a little out of hand. After publishing, I showed it to a few popular tweeps, and they were kind enough to mention it. 24 hours after the launch it has gotten over 3.5k unique visitors, 39k page views (see what I did there?) and over 240 submissions. Being mentioned by Scott Hanselman and Rey Bango helps.

I kind of felt like a mini - Mark Zuckerberg constantly refreshing the page and reading new quotes hours afer the launch.

I was somewhat surprised by how original and creative our community is. Some of my favorite quotes so far..

And so much more of them are awesome.

I enjoyed the experience so far. I’m well aware that this buzz will end soon, but I’m going to try to maintain momentum as long as possible.

That’s why I am eager to hear your suggestions and feedback.

I might open source this little project (it’s only 50 lines of code) and I might do a few blog posts on the making of in the next weeks.