In the last few posts I settled on an architecture for handling commands and queries. A byproduct of the described approach, is that your codebase quickly racks up plentiful little classes; a class to hold data, and a handler to act on that data, for each use case.

There are a few ways you can go at organizing things.

Everything in one location

When there is very little going on in your application, you can just dump everything in one location without getting hurt too much. 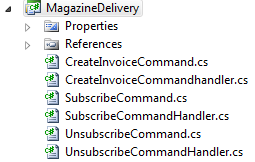 When your application grows, and the coherency between different use cases are obvious, you can just use folders - and corresponding namespaces, to organize your commands and queries, and to draw their functional boundaries. Uncle Bob and Mark Needham have sold me on structuring my code based on functionality instead of technical concepts. 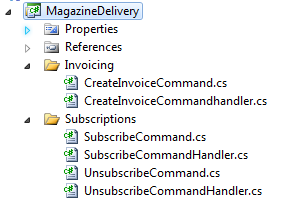 Keeping each commandhandler in a separate class is especially interesting when they are rather bulky and contain a good amount of logic. You can think of each class as a little piece of functionality in itself. Take a look at the RavenDB codebase to get an idea of what that could look like.

It also feels like this way tends to bring your code closer to the Solution Explorer; just one double-click and you are looking at your implementation; no scrolling or searching between method definitions necessary. Maybe the problem is now just shifted a level higher in the hierarchy though.

You can also opt to group commandhandler implementations in one service class. This variation might make more sense when your implementations are rather skinny, and don’t do a whole lot but translating and forwarding your invocation.

Use the hints your dependency graph gives you to find a composition that makes sense.

How do you go at organizing commands and queries?