Working on side projects, I often find myself using RavenDB for storage and IronMQ for queueing. I wrote about that last one before here and here.

One project I’m working on right now makes use of domain events. As an example, I’ll use the usual suspect: the BookingConfirmed event. When a booking has been confirmed, I want to notify my customer by sending him an email.

I want to avoid that persisting a booking fails because an eventhandler throws - the mail server is unavailable. I also don’t want that an eventhandler executes an operation that can’t be rolled back - sending out an email - without first making sure the booking was persisted succesfully. If an eventhandler fails, I want to give it the opportunity to fix what’s wrong and retry.

The idea is, instead of dealing with the domain events in memory, to push them out to a queue so that  eventhandlers can deal with them asynchronously. If we’re trusting IronMQ with our queues, we get in trouble guaranteeing that the events aren’t sent out unless the booking is persisted succesfully; you can’t make IronMQ enlist in a transaction. 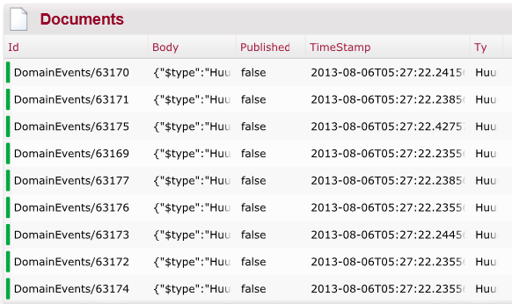 Getting the events out

Now we still need to get the events out of RavenDB. Looking into this, I found this to be a very good use of the Changes API. Using the Changes API, you can subscribe to all changes made to a certain document. If you’re familiar with relation databases, the Changes API might remind you of triggers - except for that the Changes API doesn’t live in the database, nor does it run in the same transaction. In this scenario, I use it to listen for changes to the domain events collection. On every change, I’ll load the document, push the content out to IronMQ, and mark it as published.

I tested this by raising 10,000 events on my machine, and got up to an average of pushing out 7 events a second. With an average of 250ms per request, the major culprit is posting messages to IronMQ. Since I’m posting these messages over the Atlantic, IronMQ is not really to blame. Once you get closer, response times go down to the 10ms - 100ms range.

If the subscriber goes down, events won’t be pushed out, so you need to have a back-up plan. I planned for missing events by scheduling a Quartz job that periodically queries for old unpublished domain events and publishes them.

You don’t need expensive infrastructure or a framework to enable handling domain events in an eventual consistent fashion. Using RavenDB as an event store, the Changes API as an event listener, and IronMQ for queuing, we landed a rather light-weight solution. It won’t scale endlessly, but it doesn’t have to either.

I’m interested in hearing which homegrown solutions you have come up with, or how I could improve mine.