In an Actor system, each Actor acts as a self-contained and autonomous component. An Actor can only communicate with other Actors by exchanging messages - they are not allowed to share state. Messages are handled asynchronously, and are nondeterministic. The location of Actors should be transparent; they can either live on the same machine, or on a distributed system. These properties make the Actor Model a great fit for parallel and distributed computing.

Even without considering parallelism and distribution, the Actor Model appeals to me. If you take an existing system, and make each aggregate in that system an Actor, what would the impact be? You can get rid of all the messaging and queuing infrastructure; messages and asynchrony are now first class citizens. Where you had to have discipline abiding the aggregate rules of thumb - modifying one aggregate per transaction, no references to other aggregates, Tell Don’t Ask… - the very nature of Actors will guide you into doing the right thing.
Next to these implementation concerns, the model itself can be used as a framework for modeling and reasoning about complex systems. Once they are well educated on the constraints, it must come natural for domain experts as well.

Having worked with a team of mainframe programmers over the last year, it recently came to me that how they have designed their systems over the years is compatible with a good amount of Actor laws. 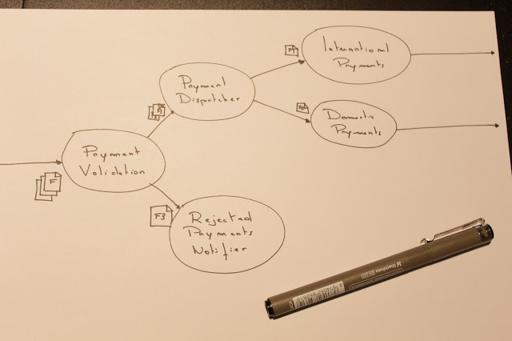 A good thing about COBOL seems to be that it’s nearly impossible to write maintainable big programs, so you’re forced to decompose your program into smallish autonomous components - into jobs.

Communication between these jobs happens by passing flat files around

Actors send messages to other Actors using their addresses. This can be a memory or disk address, a network address, email address, whatever really. In mainframe land, file system paths serve as addresses.

In general they stay away from jobs sharing state; the default is to lock files exclusively, so sharing them is highly impractical. Even most static data gets synchronized instead of shared - banking reference data, customer addresses, configuration etc…

A scheduler sits on top of all these jobs. Its responsibility is to start a job when a new file arrives. If a job fails, the scheduler acts as a supervisor and will notify operations, which will investigate the issue - probably look at what’s on the file system, and use the same scheduler to restart the failed job. Notice that one failing job doesn’t impact other jobs.

All of this gives you an automated, highly observable and fault-tolerant system.

*Although COBOL remains to be a horrible language, mainframe systems do have their strengths. There must be some good reason a lot of core business functions are still running on mainframes, right? Maybe similarities with the Actor Model are far-fetched and merely a figment of my imagination. Feel free to share your thoughts. *