Programming for the future of mobile

I have been working on something small on the side lately. I hardly have anything to show for it though, most of it is still being shaped in my head.

Anyhow, a very important part of the front-end is built using jQuery mobile. Although the framework hasn’t been released - release candidates are available though -, it’s something you should start looking into today. Why? Because the browser is the future of mobile applications. With the Flash and Silverlight bombs that were dropped today, I am even more confident that that future might be nearer than we think.

Built upon the jQuery and jQuery UI foundation, jQuery mobile aims to make mobile web applications seriously cross-platform and cross-device, while optimizing for touchfriendliness. From what I’ve seen so far, the jQuery team has (once again) succeeded at making the web just work.

To start using jQuery mobile, you just have to add one extra script file and one stylesheet on top of the existing jQuery infrastructure. Once that is done, the framework will already do most of the heavy lifting for you. Depending on your needs, you might want to enrich some elements explicitly in a nice semantic fashion.

For example, this is how you would get some collapsible panel action going.

To give you an idea, this would result in something that looks like this. Clean, right? 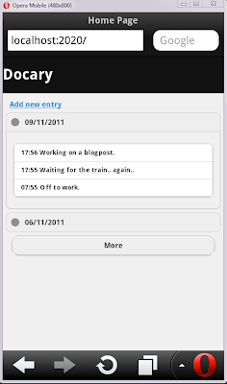 Now that these problems are out of the way soon, the only barrier left for mobile web applications is that the browser has no actual hooks in the device itself. But this last barrier can’t hold forever… Mozilla initiated a very interesting project not so long ago. They started defining standards for a set of APIs that should give you direct access to the device: a camera API, telephony and messaging API, accelerometer API.. Find everything about the WebAPI initiative here. Subscribe to the mailing list, participate and help pushing the web forward.

I’m fairly optimistic about the future of mobile web applications. It’s impossible to put a timeframe on it, but eventually WWW, the Web Will Win.