It’s that time of the year again where I take some time to look back on the year passed and peek at the year ahead. This is mostly a post I like to write up for myself, forcing reflection.

The biggest personal changes this year were moving out of my parents’ place, and my girlfriend’s decision to study medicine after graduating as a Master of Arts earlier this year. I had no idea how things would turn out once we lived together, but so far we have been doing great.

September marked one year working for Euricom. I’m still at my first client, and while I definitely regularly have my share of the enterprise blues, I also learned a lot working on several projects: from maintaining legacy to leading green fields. Fairly, I often doubt if traditional enterprise life is it for me though.

I published 66 posts this year, which seems to be consistent with previous years.

While writing has turned into a habit over the years, I often struggle with deciding what I should write about. Any reason is probably a good one though; documenting, sharing opinions and experiences, or just writing for the sake of writing… But I still feel like I should add value and contribute something worthwhile when I spend time on this blog.

The topics haven’t changed that much this year. I still write often on Web technologies (ASP.NET, NancyFx and REST) - something I didn’t get to spend much time on at work this year, but I also wrote about architecture, testing and NoSQL. Next to those topics, I also penned some of my experiences gained doing experimental side projects.
In 2013, I intent to get more out of my comfort zone, and to also write down thoughts which are not that strongly held.

Page views have more than doubled (173k) compared to 2011, which I’m humbled by, but I seem to care less about that than a little while ago. It had even been over a month since I logged into Google Analytics.

It very much depends on what I’m doing that day, but I still spend quite some time on Twitter. I often blurt out thoughts on software, and regularly, someone who knows better than me replies, and challenges my looks on software. That’s how I get value out of Twitter. That, and animated GIFs of course.

In real life, I went to see a few interesting speakers at local user groups, and gave a talk myself at Web.NET Europe Milan - international speaker, wooh. I want to applaud the organization of Web.NET Europe once more; they did a great job.

In general, I started to value artificial sponsored user groups less. They have their place, and they do add value, but it’s not something that I feel I need to be a part of. Having some beers with a few likeminded developers suits me better.

Buying an apartment and all of that, we didn’t get to make any epic travels this year. I got to visit three different countries though: Italy, Tunisia, Italy again, and France. Two out of four were sponsored by my job; not bad.

We’re setting out for a big trip again in 2013. We fell in love with America two years ago, so we’ve been researching the South-West again - but closer to the Mexican border this time. Other destinations are still open for discussion though.

I spent a considerate part of 2012 building small things on the side. This didn’t result in anything useful, but most importantly, it got me in the habit of working on my own things, and I put together a toolset which enables me to ship things fast (NancyFx, Twitter Bootstrap, MongoDB, AppHarbor, …).

The first project I did in 2012 was Docary. This was supposed to be something between a timesheet and a diary. This idea quickly died after I couldn’t commit to using it myself. Technically I played with early versions of jQuery mobile and EF, and learned why you shouldn’t overlayer your MVC application - or any web application for the matter.

For the second project, I and Davy Brion worked on TopDevLinks. This was supposed to be a linkblog implementation on top of ASP.NET MVC, CQS and MongoDB. We both lost interest in the concept eventually.

I made my girlfriend a petite portfolio site built on top of NancyFx, the FlickR API, and some jQuery plug-ins. Right now, it’s actually running as a static site on GitHub pages though.

I already blogged about the next project: Kill Long Meetings. This one is still around, but quickly floundered into forgetfulness after its five minutes of Twitter fame.

Now that I look back at it, I did write quite some code after my hours this year… Next to being in the moment of building and shipping stuff, I genuinely believe it makes me better at my job.

I hope to be able to do as much in 2013, but to also let it be something worthwhile. I’ll be actually already shipping something new in a few weeks if all goes well.

The biggest gift I gave myself health wise this year, was giving up on smoking; I lit my last one over six months ago!

Moving to Antwerp, and not having any area to put my weights, I’ve joined a gym again, where I’m doing a two times a week compound routine. That should make me stronger again; I’ve lost a lot of beef since picking up running three years ago.

I haven’t given up on running - living close to the city park helps. I just missed the 1000km (or 621 miles) milestone this year, which is kind of lame, but I’m far from complaining. 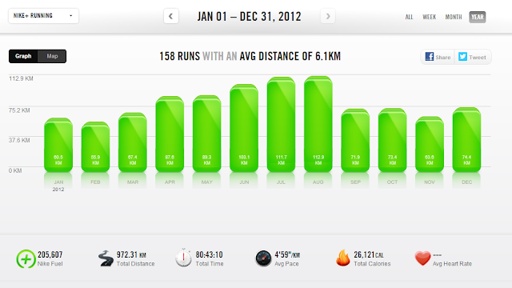 I don’t know what I hope for in this area in 2013. It’s starting to dawn on me that, even though those goals I set for myself have pushed me further than I thought I was capable of - I couldn’t jog 1km without a break three years ago, they are not that important. It eventually comes down to nourishing your body, and making use of it in every way possible while you can.

Earlier this week, I strolled down the main street of Brussels and crossed a beggar with one leg and no arms. Next to feeling extremely sorry for that man, I felt truly blessed; I’m healthy, loved, have more than I need, and I get to do what I like for a living. I need to remind myself more of that in 2013 - I can be a whiny bitch.

Now, if you’ll excuse me, I’m going to help a hand in preparing the festivities before the girlfriend really gets in a faul mood.

*Holy crap, when I sat down to write this, I didn’t expect to write a whole book. I’m wondering how many people actually made it down here. *