Somewhere over a year and a half ago I discovered the music of Dire Straits, which has sparked a fanatical love and fascination for the guitar in me, and basically for every piece of music Mark Knopfler has ever touched (*). A year ago, I finally had the courage to pick up the guitar myself. Not sure if I’d stick with it, I made an uninformed purchase of a rather inexpensive Squier Jazzmaster, just because it somewhat resembled the real object of desire, a Fender Stratocaster. Three months ago, I got rid of the Jazzmaster, and bought myself a tango red Mexican Stratocaster, and I’m in love with it. Yet, I have also become very fond of the sound of a Les Paul these days. Having just bought the Strat, I thought I could maybe find a cheap used Les Paul online.

I set out to find one on the most popular Belgian online secondhand marketplace (600k visitors daily), so I started browsing their listings daily. This turned out to be rather cumbersome and inefficient: constantly repeating the same process, items were already sold before I could make a bid, there were no new items since the last time I visited… It didn’t take me long before I started thinking of a way to automate this dull process. Looking at other marketplaces, I found that some unburden their users by providing notifications; push instead of pull. Maybe I could build something similar?

Doing a bit of research over the weekend, I found out that they expose, what I call, an accidental API; written in first place to provide a snappy mobile user experience, not to expose all their data to third parties. Having an uncomplicated way of searching their data, I built a bit of code on top of it. Nothing all too fancy though; a Quartz job which periodically queries their service, parses the results and stores them in a RavenDB database. A few times a day, these search results are then compiled, and sent to my inbox using MailGun. All of this running for free on AppHarbor.

Showing all of this to the girlfriend, she asked if I could set up the same thing for her, but then for a specific type of camera. This is when I decided it could be useful enough to make it publicly available. I thought of a few ways to support the costs of hosting (which are extremely low): embed ridiculously relevant ads in the mails, make people pay for more frequent polling, or sell it (although very unlikely).

Two weeks later, I had something working online. 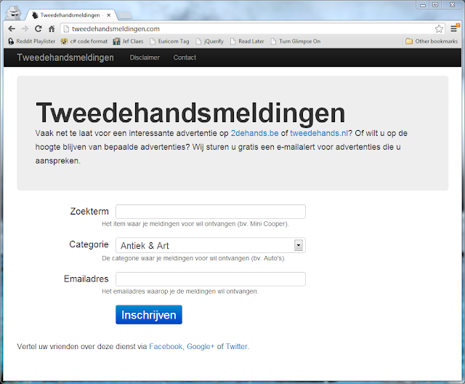 But how do I inform people of its existence? I first thought of using Twitter to monitor for relevant tweets where people ask for something secondhand. I started out by using a new dedicated generic account, but this got suspended rather quickly. In the second iteration, I used my personal account. This yielded better results; people saw I was human, and regularly thanked me for the tip. They didn’t sign up too often though..

Not willing to give up on the idea already, I used Google Adwords to advertise on the online marketplace directly. The results of this campaign were sobering, but extremely valuable; people just didn’t care. As a side note; secondhand seems to be quite an expensive keyword! 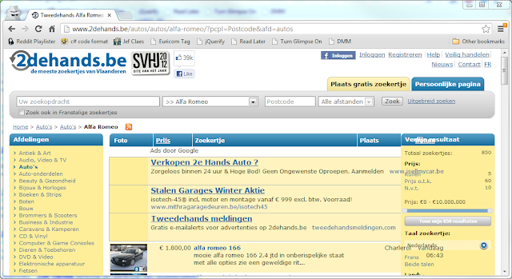 In hindsight, I can think of plenty of reasons why this somewhat useful project has no success:

Here are a few things I learned/got confirmed:

(*) Take some time to explore his work: brothers in arms, postcards from Paraguay, song for Sonny Liston, you and your friend, and so many more are worth a listen.