Last week I shared my theoretical understanding of event sourcing. Today, I want to make an attempt at making that theory tangible by implementing an event sourced aggregate.

In traditional systems, we only persist the current state of an object. 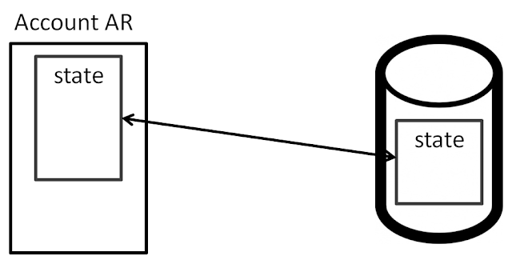 Next to the Initialize and RecordedEvents method, our aggregate facade hasn’t changed. We still have a Deposit and a Withdraw operation like we would have in a traditional aggregate. How those two methods get implemented differs though.

When we deposit or withdraw an amount, we want to - instead of changing the state directly - apply events. When an event gets applied its handler will first be invoked, for the event then to be recorded.

An event recorder is a small object that keeps track of recorded events.

This object will be used to have our aggregate return a stream of recorded events.

We can now also implement initializing the aggregate from a stream of events.

Here too, event handlers are invoked by using the dynamic run-time to find the best overload.

It’s the event handlers that will change the aggregate’s state. In this example, they can be implemented like this.

A test verifies that when I invoke operations on the aggregate, all the events are recorded, and the state has changed. When I use those recorded events to rebuild the same aggregate, we end up with the same state.

And this is all there is to an event sourced aggregate.

For this exercise I tried to keep the number of concepts low. Many will have noticed that extracting a few concepts would benefit re-use and explicitness.

Also using the DLR to invoke the correct event handlers might be frowned upon; it’s not the most performant method, each event must have a handler, and in case a handler is missing the exception is not pretty. Experienced readers will also have noticed concepts such as versioning and snapshots are not implemented yet. I hope limiting the amount of concepts and indirections made this blog post easier to read.

Next week: where do I persist these events?