Spinning the wheel: manipulating the odds

The previous post defined a basic set of data structures and functions to spin a wheel of fortune in F#.

There was very little mystery to that implementation though. The physical wheel had four pockets and spinning the wheel would land you a win one out of four spins. As a casino, it’s impossible to come up with an interesting payout using this model.

To juice up the pot, casinos started adding more pockets to the wheel of fortune. This meant that the odds were lower, but the possible gain was higher. More pockets also allowed casinos to play with alternative payouts, such as multiple smaller pots instead of one big one.

Adding pockets to the wheel didn’t turn out the way casinos hoped for though. Although players were drawn to a bigger price pot, they were more intimidated by the size of the wheel - it was obvious that the chances of winning were very slim now.

Today, instead of having the physical wheel determine randomness, randomness is determined virtually.

Casinos now define a second set of virtual indexes that map to the indexes of the physical wheel. 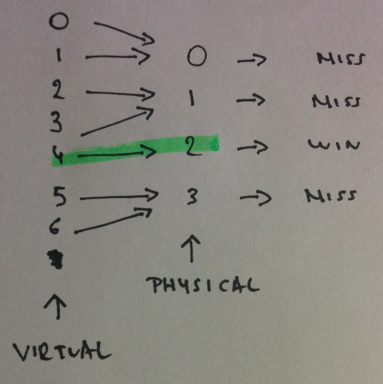 There are seven virtual indexes; six map to a miss pocket and only one maps to a win pocket - one out of seven is a win.

When we now spin the wheel a million times, the outcome is different. Although the physical wheel has four pockets, we now only win one out of seven times or 14% of the time.

Using this technique, the physical wheel only serves for interaction and visualization. Randomness is determined virtually, not physically.

In my next post, I’ll describe how casinos have tweaked this model to create “near misses”, making players feel as if they just missed the big pot.